I landed in America in the frozen month of January 1979, landed on the nick of time, landed to find out that Maya Angelou was coming to my university, Middle Tennessee State University, that month. I knew about her and her name, but I did not know exactly how I knew her and her name. I read voraciously, having read more than 130 novels in one year. I knew Maya Angelou. Our paths crossed on a landscape in our literature world.

Of course, whirlwind preceded her into Murfreesboro, a laidback college town. All was abuzz, all was aflutter, and I went about ensuring that I secured my one ticket even if I had to move all the numerous mountains in Tennessee.

For fear of being mugged, I did not tell anyone in my English class that I had secured a ticket for Maya Angelou’s visit to our then small campus. Armed with one of her books and having eaten an early dinner in the cafeteria, I arrived hours early, located the best seat in the theater, and waited.

The beams from her perfectly formed white teeth were enough to illuminate the entire auditorium. She smiled into every soul. I still remember those smiles and how she waited patiently to sign everyone’s book despite the lateness of the hour long after her serenade.

From that smile onward, I knew her, read her, tuned in to hear wisdom, to catch sunlight, to feel phenomenal, and to let her aura lift my hand so I could emulate her magic on paper. I sat spellbound at President Bill Clinton’s inauguration as Maya Angelou welcomed the entire earth, rejoiced as she and Oprah bonded, and mimicked several of her poems in my collection.

Fast forward to decades later when my daughter bought and consumed several of Maya Angelou’s works on her own, boundaries could not contain my joy. When I found out Maya Angelou was only three years older than my mother, Virginia Ohanenye, who passed away in 1990, tenderness wound itself completely around my heart. When she wrote the poem in memory of my Michael, fondness for her deepened. When she paid a powerful tribute to President Nelson Mandela on behalf of America, speech left me.

Maya Angelou passed away on May 28, 2014.That focused, high-powered smile from January 1979 still transcends my literary and physical worlds. I hope she becomes a sister-friend to my mother who gave so much and taught so many. 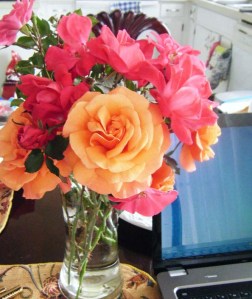