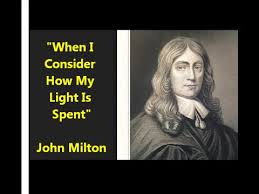 What unfolds today is my attempt to analyze these two literary giants and some of their works. Of course, any discussion of poetry will be incomplete without the mention of the BARD, Mr. William Shakespeare himself, but I will try not to let him take center stage.

Actually, I find any poet of repute very interesting. I like Emily Dickinson’s poems despite her morbidity. However, like her, I have written thousands of poems and hope to release them to the world sometime soon. (A shameless plug!)

I will start with John Milton’s “When I consider how my light is spent.” This poem is one of John Milton’s sonnets, a Petrarchan sonnet in iambic pentameter, and I have written a few of those. For this particular poem, the rhyming pattern is ABBA (spent, wide, hide, and bent) ABBA (present, chide, denied, prevent), CDE (need, best, state) and CDE (speed, test, wait), which Milton maintains effortlessly. The first eight lines, the octave, do lament wasted time and asks God for patience to prevent “the murmur” of displeasure from Him.

Unlike the Shakespearean sonnet, in the Italian sonnet, the 14 lines run continuously. Shakespeare leaves the last two lines of the Shakespearean sonnet as couplets. Milton does not conform to traditional meter. His poem is truly unorthodox. Because he sacrificed cadence (at least not one that is decipherable or consistent) for enjambment, his poem lacks the sophistication I have come to expect from him.

He splices end words into the next line and creates some of the most fascinating enjambments from Line 1 into 2: “my light is spent ere half my days” or “My soul more bent to serve” for Lines 4 and 5.

Unlike a classic Italian sonnet, “When I consider how my light is spent” does not divide cleanly into eight lines and six lines. As for meter, the poem employs iambic pentameter; it provides five iambs (an unaccented syllable followed by an accented syllable), and a few of the lines do not follow any regular pattern.

The second poem I choose to analyze is Emily Dickinson’s “Wild Nights,” Poem 249. The idea of Dickinson writing a poem with “wild” in it causes me to giggle but also to pay particular attention to it because I know there is surprise in store for me.

Although the poem contains no plot per se, it does indicate some sexual undertones, which may not be what she had intended. It is refreshing to read a Dickinson poem that is not about death or dying or some other form of morbidity.

Her poem, like Milton’s, is unorthodox because it is rife with exclamation marks, which could show intensity of emotions or the excitement of reuniting with a lover. This poem has cadence and rhythm even if one has to stretch the “luxury” in order to hear the long “e” and in order to help the poem confirm to the rhyming scheme of ABBB.

The second stanza does not have any particular scheme. However, the cadence is still present and so is the rhythm even as there is a tonal shift, more sing-song than in the first stanza.

Stanza 3 uses the rhyming pattern of ABCA. Dickinson also employs enjambment but (in my humble opinion) should have run the word “Tonight” into the next line as the beginning word rather than as an enjambment.

Just like she uses exclamation marks liberally, she also uses ellipses in the form of dashes, not periods. “Wild Nights—Wild Nights!” The combined effect is a poem that breaks character for her.

Dickinson employs trochees. She also keeps up the pattern of dimeter, two beats, intermittently in the quatrains. This tricky poem alternates between iambic tetrameter and trimeter lines like “Ah, the Sea!”

I imagine Dickinson took a risk here and wanted to have fun for a change. She is usually the queen of what I call “form and circumstance,” pledging never to break form. This poem is a pleasant surprise, and it has allowed me to see her in a different light.

It is a very short poem that packs a dollup of surprising fun in its form, cadence, and in its protracted rhythm in order to reach the cadence Dickinson desires.

All opinions expressed herein belong to Frances Ohanenye. Please share your reflection on my analysis.